It was an excellent grading with first class spirit and technique demonstrated by all. Congratulations to everyone who passed.-Shihan
Posted by Admin at 12:03 No comments: 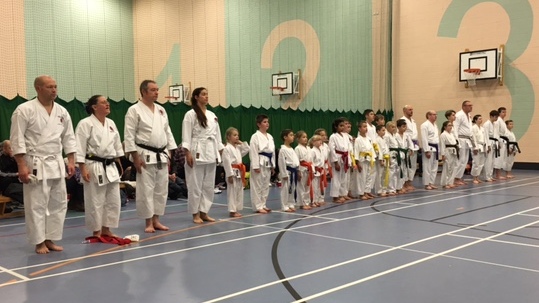 Get your own
Posted by Admin at 03:54 No comments:

The Championships are almost upon us and we need to finalize the numbers. Below is the entry form, please fill in the bottom and get it back to Sheila Sensei or your instructor asap.

You are all cordially invited to the SKKK Quiz and Concert night.

This is a fun family evening with a pub quiz and live music provided by our very own Ed and April Wallis.  Food will be provided.

If you require a veggie option please message accordingly.

The SKKK are proud and excited to welcome two world class instructors to the Honbu Dojo, Sensei Dave Hooper and Sensei Simon Oliver.  All are welcome and encouraged to attend. This is a fantastic opportunity to learn from two top instructors.

The focus of the course will be traditional Shotokan Karate from a brilliant practitioner of the art known as one of the best western technical instructors in the world.  Please see below for more info on Sensei Hooper. 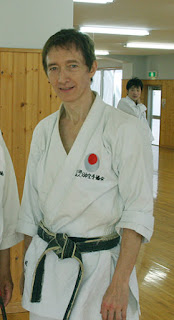 Sensei Dave Hooper first took up karate as a schoolboy in England, in the 1970's. Nearly eighteen months later he made up his mind to go to Japan to train - the result of his first encounter with Osaka Sensei. He had been invited to London as a guest instructor on a special course. Within ten minutes of being in his class, Hooper Sensei realised that here was a totally different level of karate. It was this karate that he wanted to learn, and this was the person he wanted to learn from. He informed him at the end of the session that he would be coming over to Tokyo as soon as he had finished high school. He arrived at the JKA Honbu (the headquarters of the Japan Karate Association) about one year later.
Hooper sensei was shocked to find that no other Englishmen had got in ahead of him, but it was an even greater shock that four French dan-grades were already well-entrenched at the JKA: He could already see that training here was going to be far worse than he had previously imagined.

He practiced regularly, six days a week, for the next year and a half, and was awarded shodan before returning back to the UK, to begin a three-year undergraduate course at university. In order to maintain the level of training to which he had become accustomed in Japan, he ran a club at the university in Wales. During this period, he was introduced to Kawasoe Sensei, and periodically, he would travel the 250 miles down to London to practice at his own dojo - a dojo that was straight out of Japan.

Apart from a brief visit back to Japan in the summer vacation Hooper Sensei had to wait until graduation before he could return to Tokyo and resume his training at the JKA. This second stint in Japan lasted for the next four years, during which time he was invited to train at the infamous Takushoku University Karate-bu (club), from which many of the JKA instructors (Kawasoe Sensei and Osaka Sensei included) had graduated. He was also a member of Nakayama Sensei's private dojo (The Hoitsukan dojo) for a couple of years, in addition to continuing his training at the JKA.

Hooper Sensei took sandan under Nakayama Sensei in the summer of 1985, and then returned to the UK for another three years where he completed a Ph.D. in motor-control and learning, also at the University of Wales. During this period, he once again ran the university karate club, but much more on the lines of Takushoku's training regime. He was encouraged to realise that contrary to everything he was told on his return, British students were, in fact, quite receptive to this style of training.

In 1988 Hooper Sensei left Britain for the last time, and went back to Japan to live, currently working full-time in one of the major universities in Tokyo.

The first session will focus on self defence and close quarter techniques designed to assist you in real life situations.
The second session will cover similar criteria designed only for adults and senior grades. Please see below for more info on Sensei Oliver.

Simon Oliver 6th Dan JKR Profile UK Chief InstructoSimon Oliver is a well known international instructor who also runs the JKR-UK Hombu Dojo in Nottingham. He holds qualification in many martial arts, including several different styles of karate, Jujitsu, Kenjitsu, Iaijitsu, Judo and Aikido. This wide range of skills makes him a very interesting instructor in close quarter techniques and applications of the meaning of kata techniques…
Simon Oliver comes from a background of Martial Artists. His father and uncle studied various styles including Judo and Ju-Jitsu. Simon originally started training under the guidance of his grandfather, who had studied Ju-Jitsu with Tani Sensei. But when the front lounge became too small his father enrolled him in the local boys Judo Club.
However, on seeing a dynamic display of Karate at a local fair Simon decided he wanted to train in this instead. So after pleading with his father he joined Wado-Ryu Karate (in 1968). He achieved the rank of Shodan in 1972 and won Junior Kumite and Kata in a local competition. This was to be the beginning of Simon’s career and study of Karate.
His family then moved to Doncaster where Simon studied Shukokai. However his greatest influence came from meeting Terry O’Neill Sensei at a Shotokan seminar in 1975.
In 1976 he moved to Nottingham, he started training with Sensei Shiro Asano but unfortunately training times clashed with his studies at Trent Polytechnic and with his part time job with the Nottingham night club security business, so he started training with a small KUGB dojo and travelled to Liverpool once a month to continue his training with Terry O’Neill. It was not long after this that Simon opened the Zanshin dojo with two former students of Sensei Asano’s. His dojo proved very successful.
Although having competed for many years Simon has become renowned for his traditional, defensive techniques found in Kata.
Simon has since spent many years studying Kata in depth and has intrigued and inspired many karateka around the world with his seminars, demonstrating practical interpretations of kata movements (Bunkai, Oyo and Henka).
He has released many video’s to explain and help develop a better understanding of kata and has been the focus for many magazine interviews.
In 2003 Simon and Terry O’Neill held a seminar alongside Sensei Konishi and Sensei Yamazaki at the Konishi Kata World Championships and All Masters seminar in Brighton. Simon joined JKR in 2004, and he is currently based in Nottingham as UK Chief Instructor and European Director.

We look forward to seeing you all there for a full and productive class.

Congratulations to our students who have successfully graded. 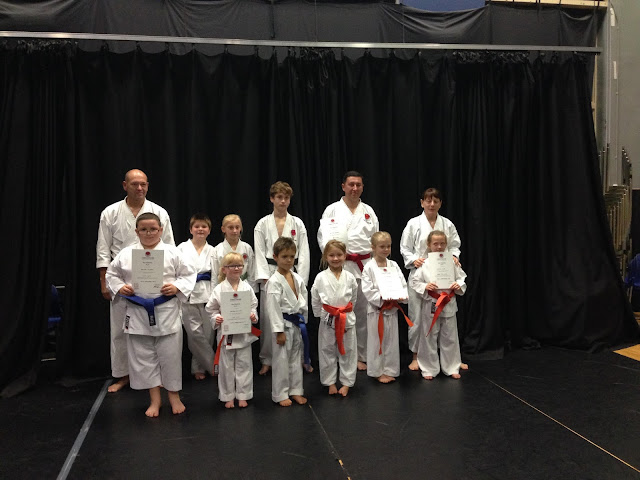 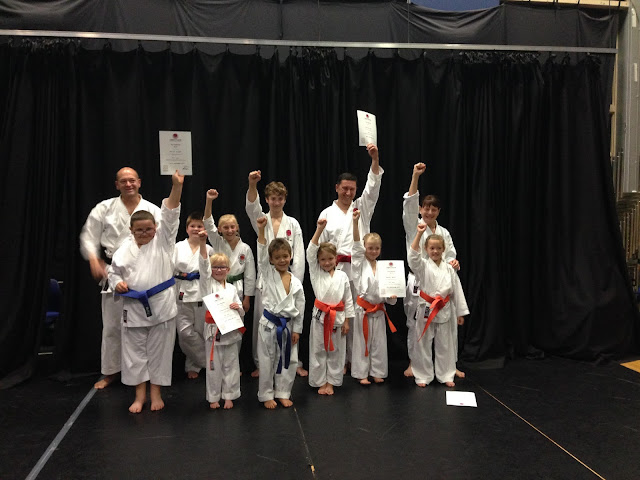 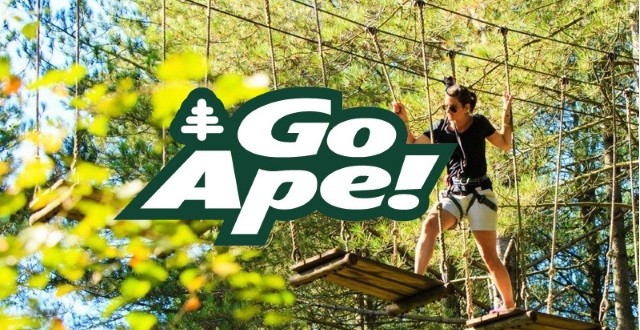 On the 27th of Sept we have a proposed social event of Go Ape.  For those that are not familiar Go Ape is a tree top adventure where participants of any age can climb through the trees attempting different obstacles from tree to tree while attached to a zip wire.  Each section ends with an exhilarating zip line to the bottom.  I've done it before and it's great fun.  There are 2 courses for different age levels so all ages from 4 can enjoy.

There are also picnic areas we can reserve for ourselves to have a picnic once everyone is finished the course.

I would like to find out how much interest there may be for this event to determine if we have a large enough number to put together a group.  Unfortunately there are no group discounts but I have laid out the costs below and included a link to the website so people can look for themselves.  Leeds Castle is our closest course so this is where we would attend.

You are still welcome to come but not behave like a monkey and just watch the kids giggle.  The more the merrier.  Please let me know as soon as you can if you are interested then we can start to firm things up.

They do offer a 15% discount for college and university students with id.
Adults are encouraged to participate to be a guide with the kids.

Please email info@skkk-karate.org.uk if you are interested as we will need to make a booking if we are to attend.  Please let us know how many and ages as well.

JJ Criss
Club Administrator
Posted by Admin at 02:58 No comments:

Every month, Mars Milk Play Fund will be donating a £1,000 cash award to a sports individual, club or project in need of extra funding.

Please vote for the club via the link below. The extra funding will help pay for equipment and travel subsidies for students to attend tournaments.

Congratulations to all that graded this week.  Excellent spirit was shown by all! 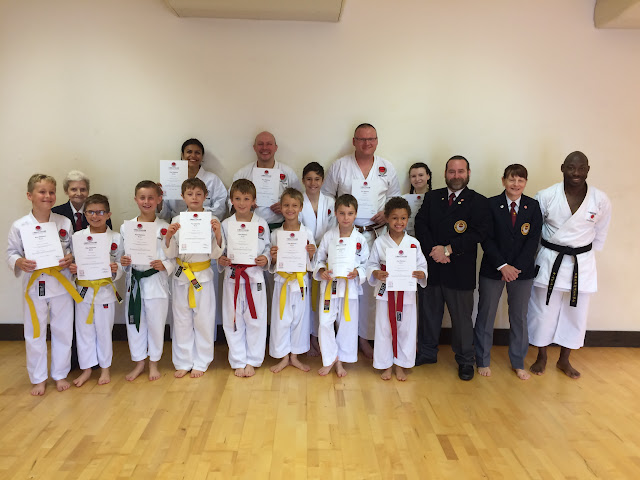 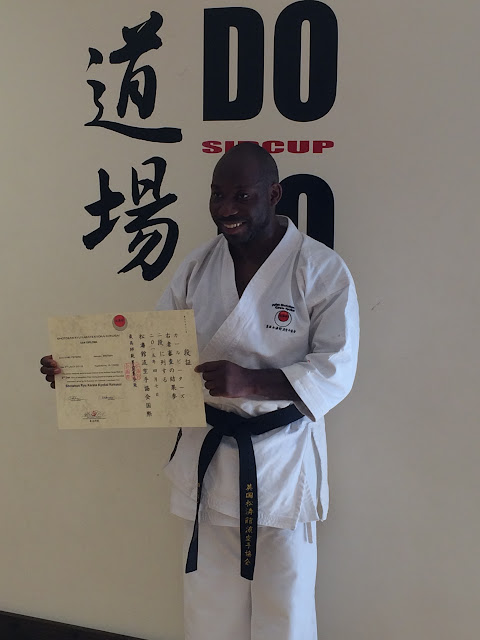 The SKKK are very excited to announce that the Children's Championships are almost upon us!  We would like everyone, friends, family, distant relatives and any karate enthusiasts to take the time to come to Townley Girl's School on the 31st of May to show your support for our extremely talented crop of youngsters.

This is your chance to see the skills that they have been honing over the past year and to applaud the hard work and dedication they have show.  We are very proud of our kids and want everyone to see.

For the competitors, the deadline for submission of your attendance sheet is the 16th of May.  Please use the form below and return to Sheila Sensei or your instructor.

Good luck to all and see you at the competition. 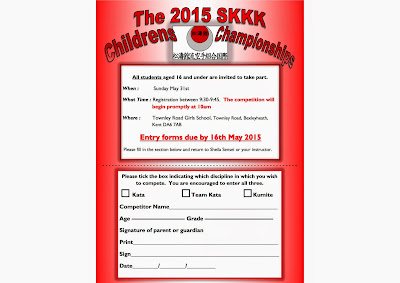 Email ThisBlogThis!Share to TwitterShare to FacebookShare to Pinterest
Labels: championship

Brilliant night of bowling and games in Bexleyheath on Saturday.  Congrats to Harry Smith who won the kids trophy for highest score and to his dad Toby for the Adult trophy (under investigation for over-use of Children's bumpers lol).  Thanks most of all to Sheila Sensei and the events team for putting together such a fantastic and fun family evening. 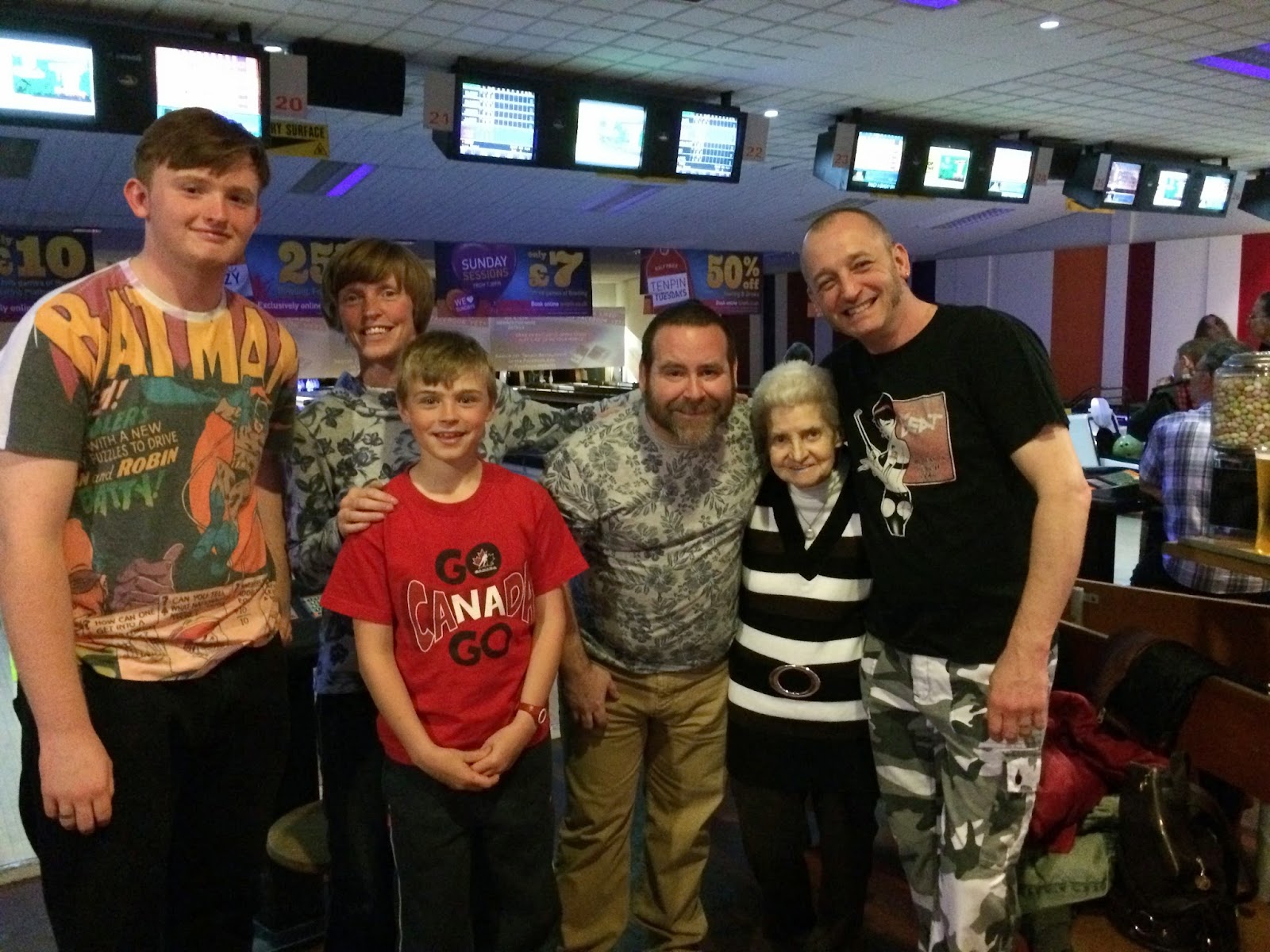 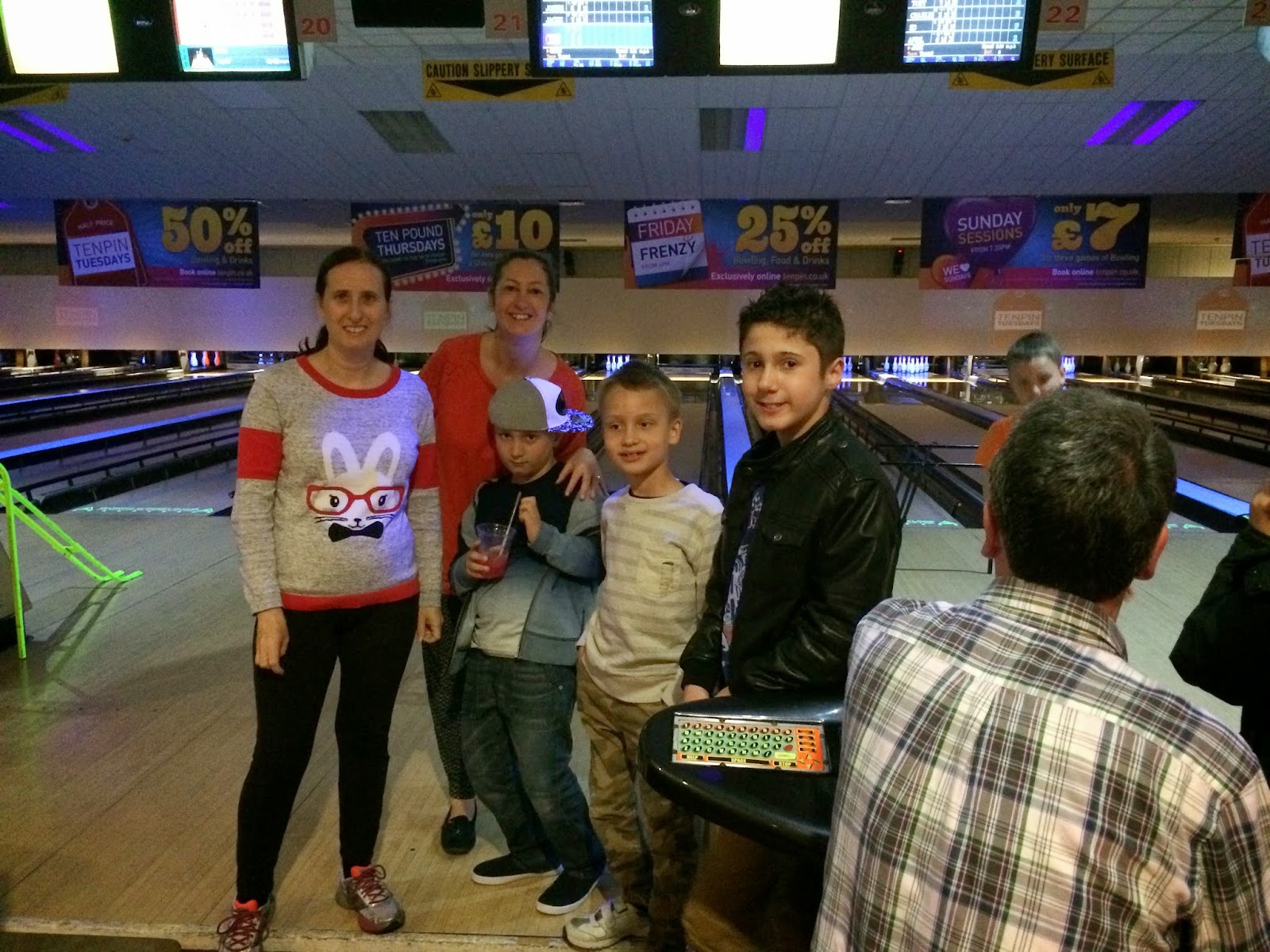 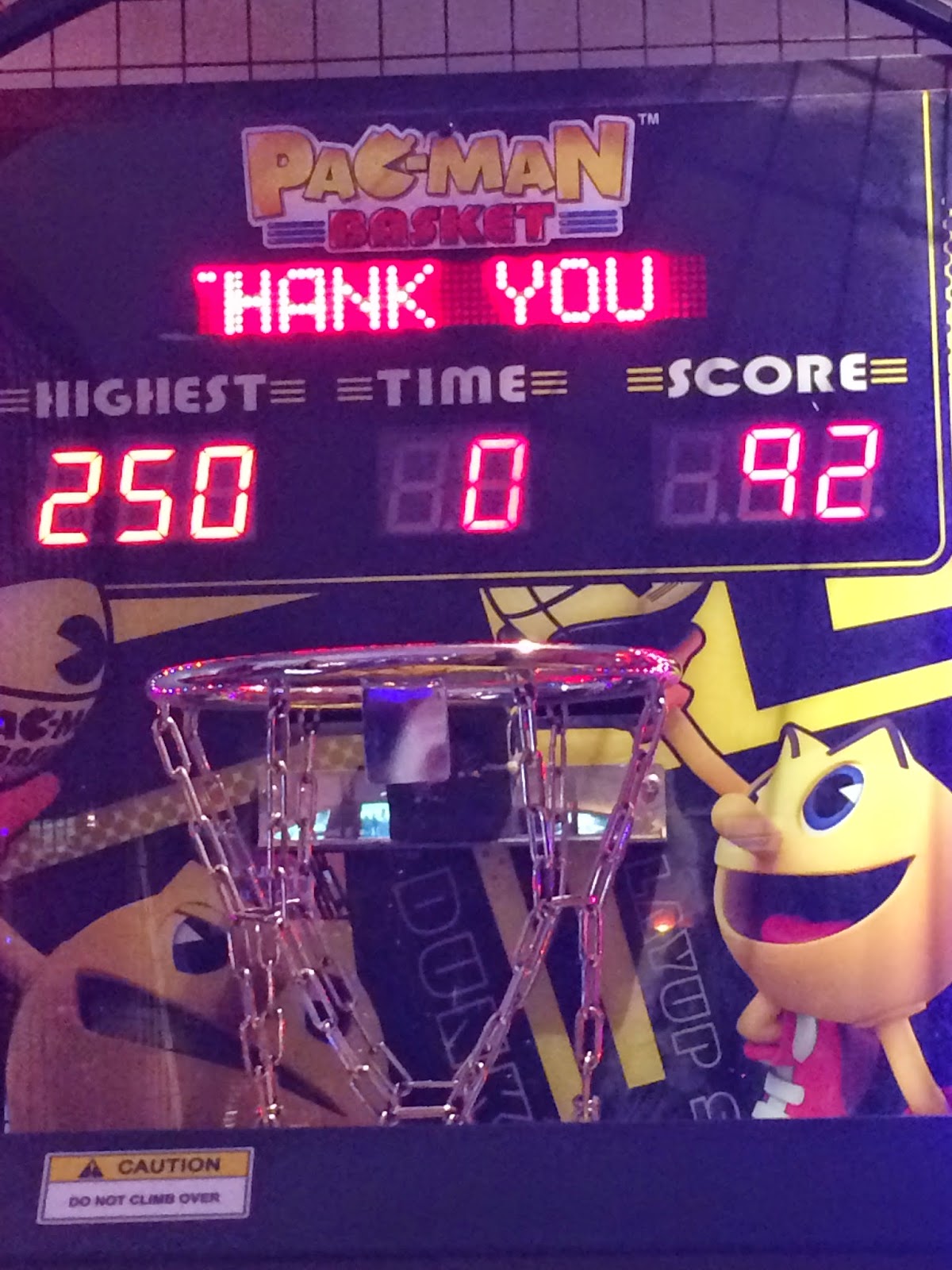 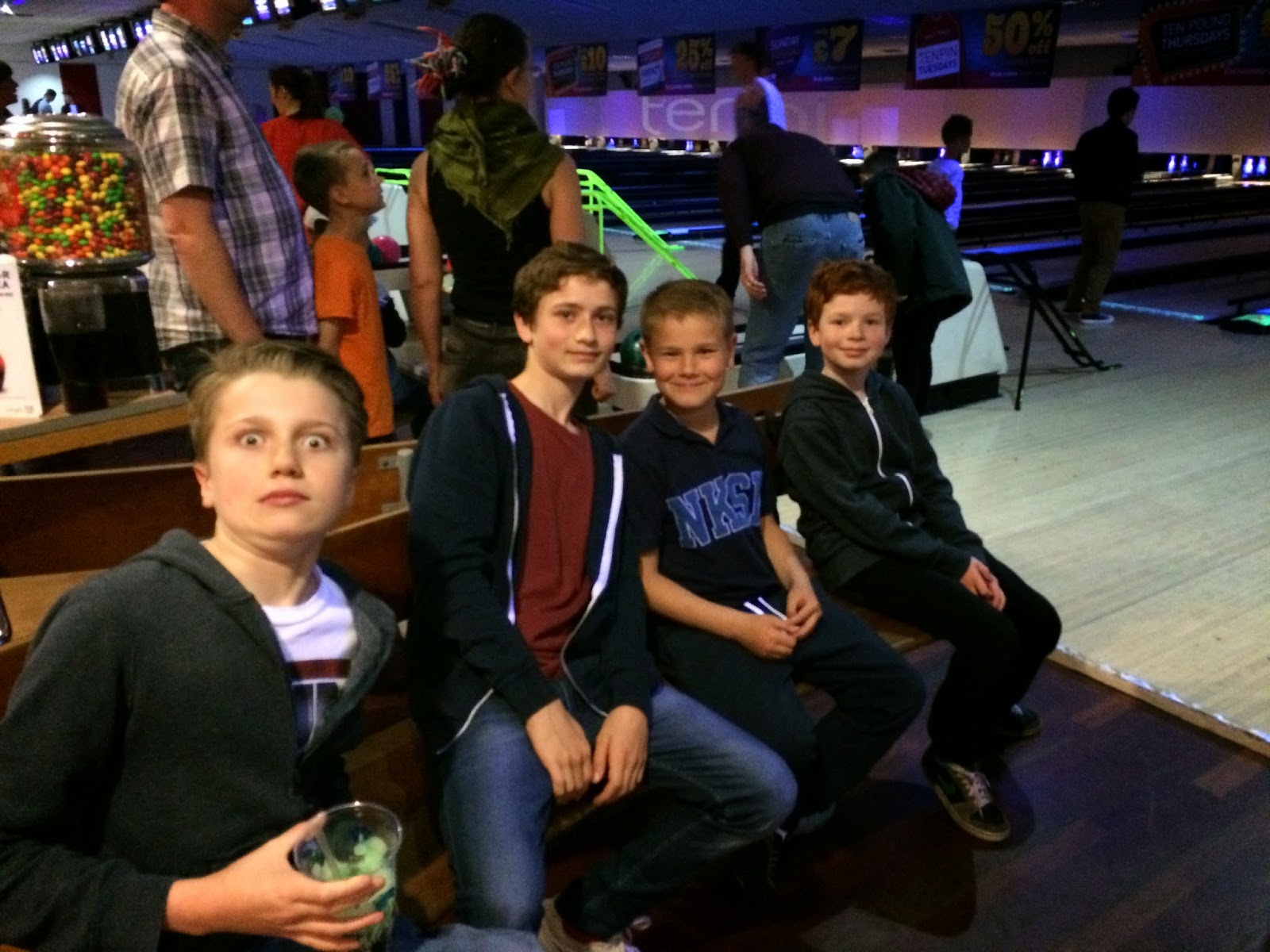 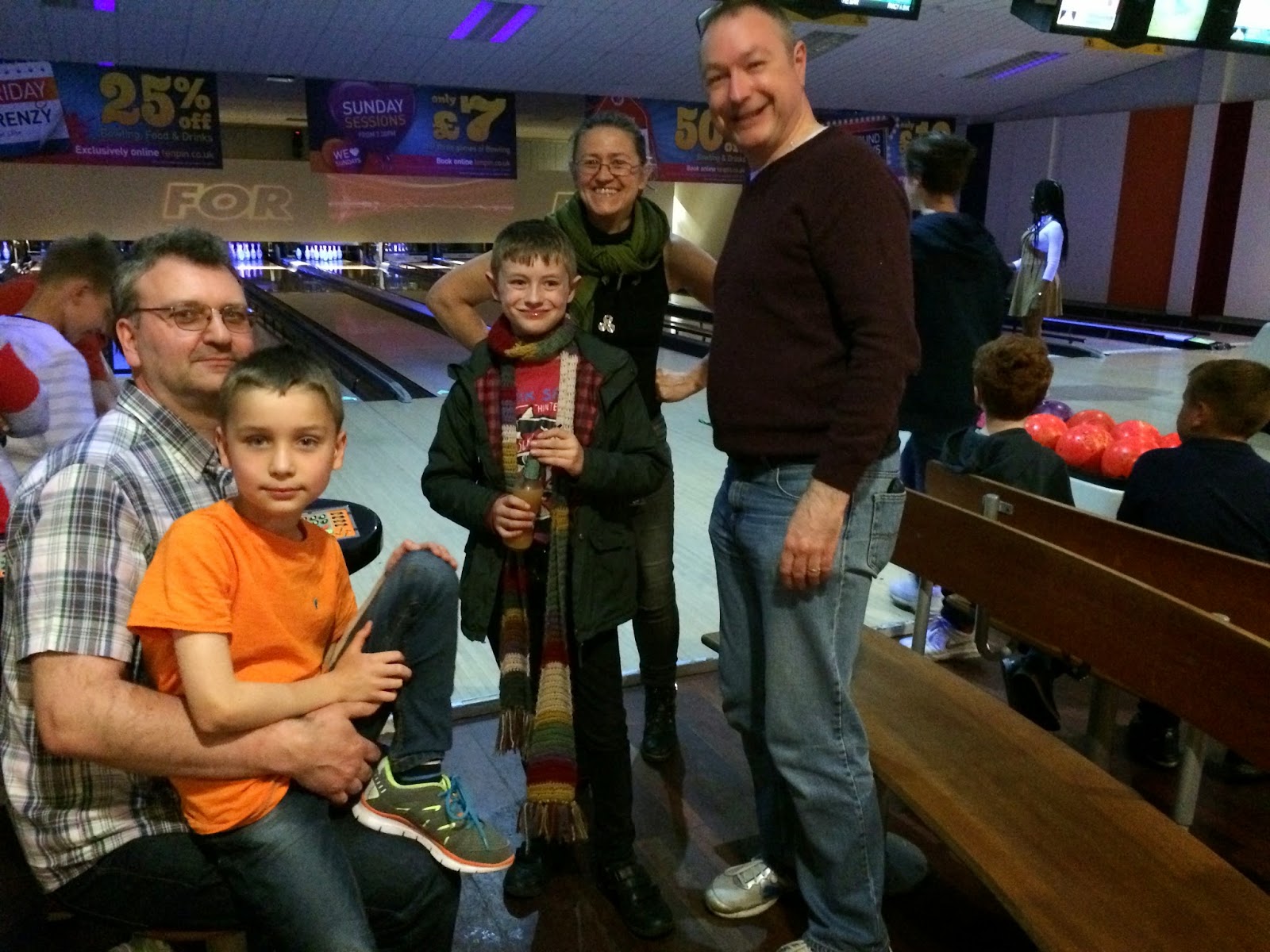 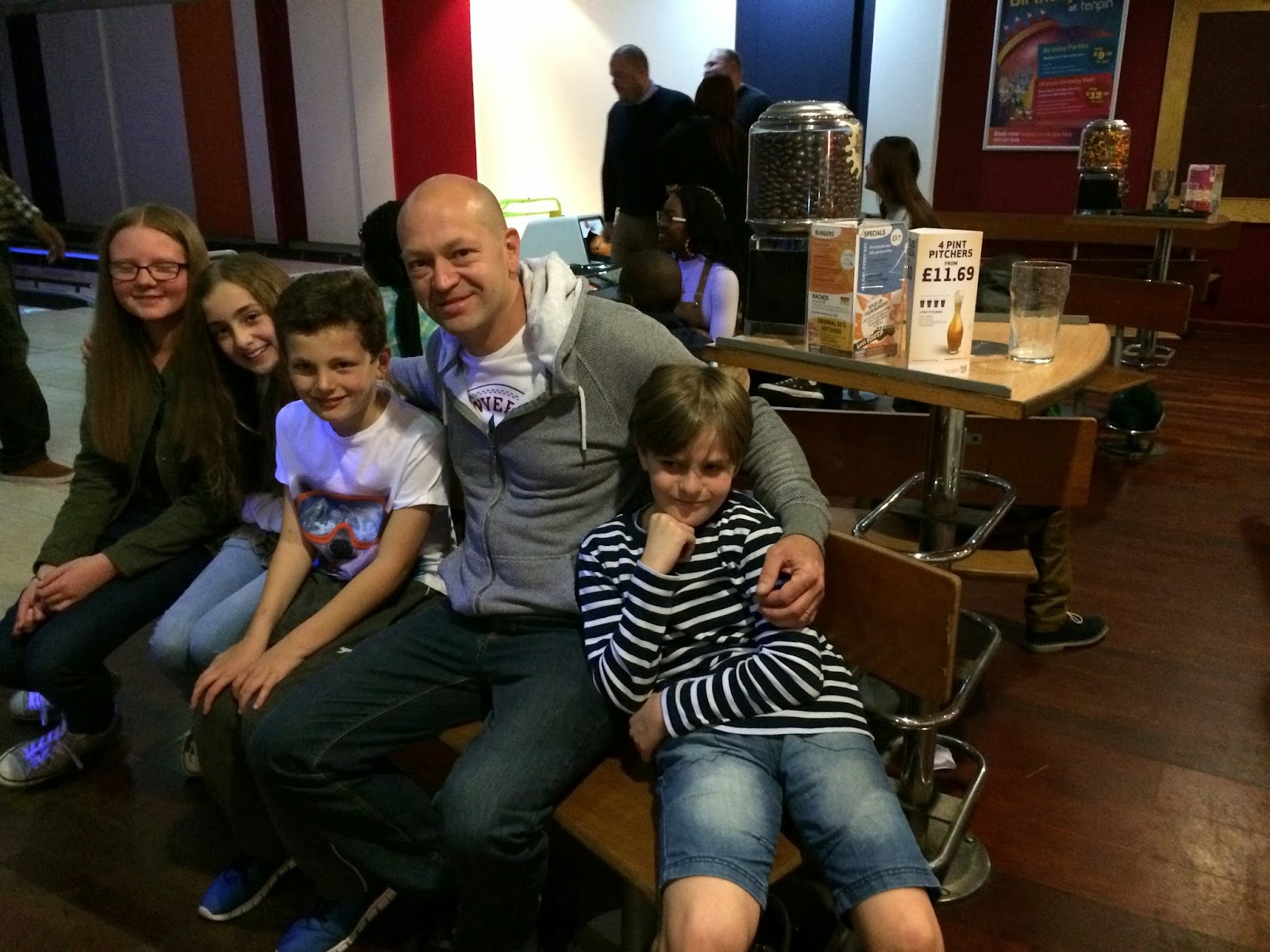 Following a review of the structure of our world governing body, the World Japan Karate Association (WJKA) in April this year, Kevin Thurlow Shihan, 7th Dan - Chief Instructor to SKKK was promoted to the position of Worldwide Chairman of the WJKA by unanimous decision. This now means that Kevin Shihan will be responsible for the day to day management and development of the WJKA across the world. This is an amazing position and recognition for our Chief Instructor and we  wish him the best of luck in his new post.

A couple more names for the list from the Mayplace dojo!  Congrats to new student Flynn Hammond for reaching Kari Red Belt so quickly, well done!  Also congrats to Paul Pettitt for reaching 1st Kyu, brown with 2 stripes!  May the successes continue.
Posted by Unknown at 01:21 No comments:

Email ThisBlogThis!Share to TwitterShare to FacebookShare to Pinterest
Labels: grading

Congrats to all the students who graded!

Congratulations to all of the students who graded this week.  You all did a fantastic job and we are very proud of you.  Keep up all of the good work. 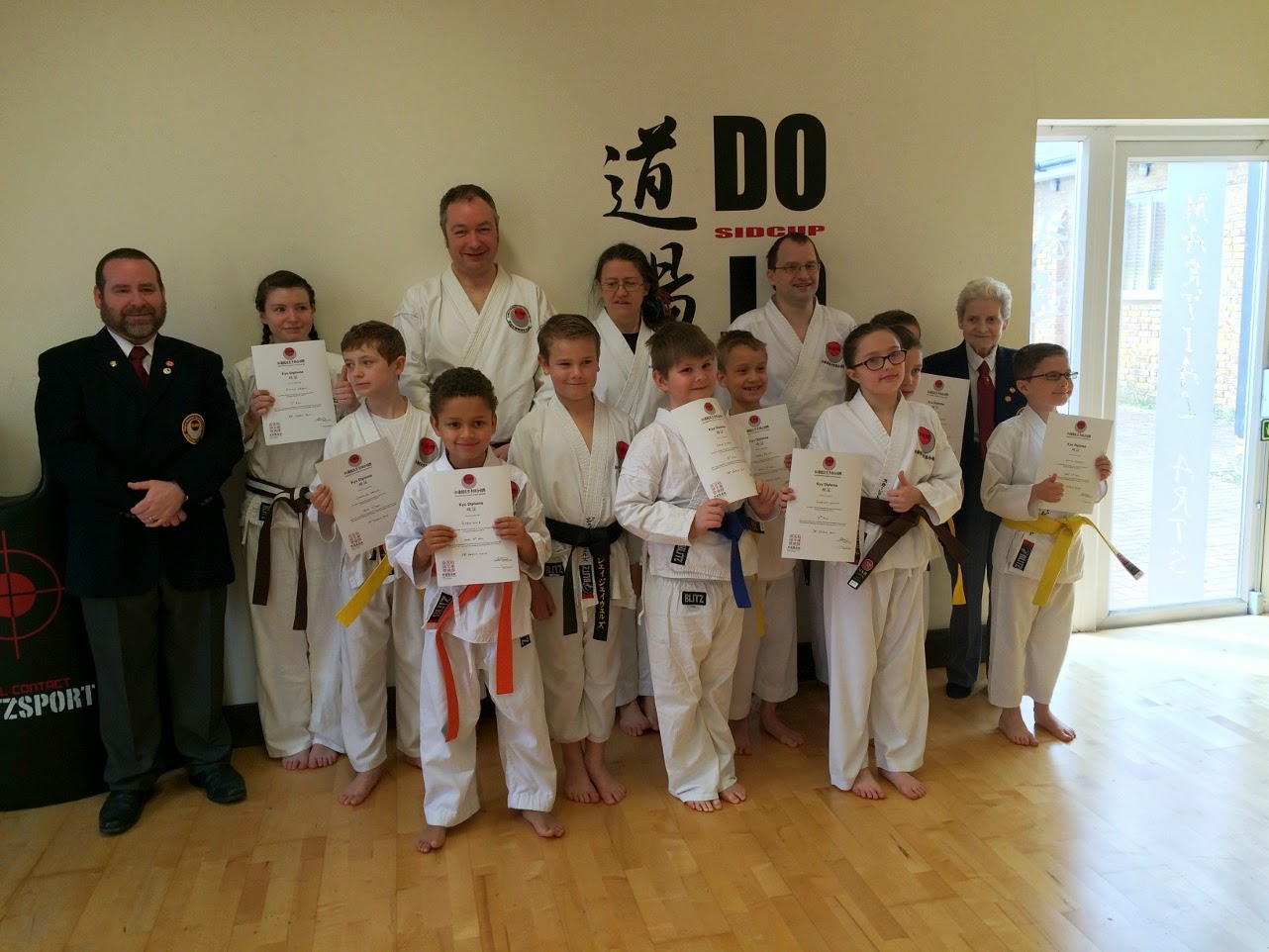 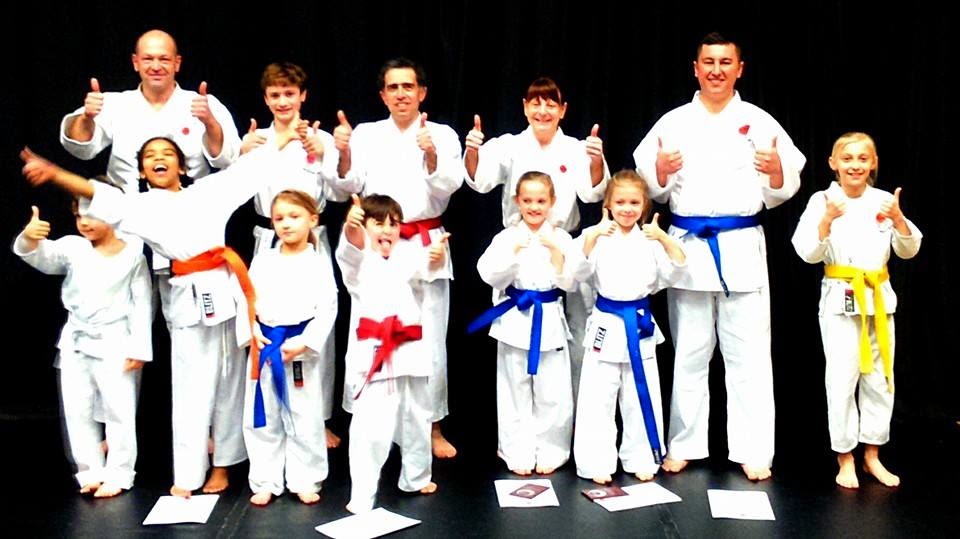